Who doesn’t love playing video games? They are the favorite past time of millions of people across the globe. Some of them have turned their favorite past-time into their primary source of income.

How did they do that? Well, they followed the trend of creating videos online on various streaming platforms such as YouTube and Twitch.

If you’re still using an older version of the OS, you can always check out the best screen recorder for Windows 10.

If you are also interested, then the first thing you should know is how to record gameplay on Windows 11. Since Windows 11 is the latest operating system, many users who have installed it would like to know how you can record your gameplay on it.

Once you are done recording your gameplay, you can simply edit it or live-stream it onto different platforms and grow your subscriber base.

Not everyone will make it big in this league, but it is worth giving a shot. And if you are intrigued by it, then you have landed in the right place.

In this guide, we will show you how you can record gameplay on Windows 11 using the in-built tool and third-party apps.

How is Windows 11 better for gaming than Windows 10?

Microsoft is one of the big names in the gaming space. Along with games for their desktops, Microsoft also has a lineup of Xbox consoles for those who want dedicated beasts for gaming.

Since we are focused here on Windows 11, some of you would like to know if Windows 11 is better than the previous version of the OS, i.e. Windows 10.

It all started with Windows 8, where Microsoft included the Xbox companion. This tool came with features such as access to the live Xbox community, remote control, second screen, and more.

Then, with Windows 10, Microsoft added somemore features to the Xbox companion, including a Game Bar, screen capturing, broadcasting, and even a dedicated settings page for the game you are running on your PC.

With the new Windows 11, Microsoft has added a bunch of cool features that will take your gaming experience to a new level.

Windows 11 gets the Auto HDR feature. This will enhance your gaming experience by converting the SDR content into HDR using machine learning available in Windows 11.

Moreover, the new OS also gets the Direct Storage option. This enables the API to allow the GPU (Graphics Processing Unit) to directly load the data from the SSD. Previously, this process also involved CPU processing, which is now not needed, as a result, saving a lot of power.

Though these are not groundbreaking changes, they are good enough to make Windows 11 a better OS than Windows 10 for gaming and coupled with a great gaming laptop, you’re ready to explore some of the latest titles.

How to screen record on Windows 11 with audio?

Your recorded video will be stored at the selected location. As mentioned, there are a bunch of options to explore inside the Xbox Game Bar. Feel free to use them.

Well, you don’t need to rely on the in-built screen recording tool to record your gameplay on your Windows 11 PC. There are a plethora of options to choose from.

However, do note that you might get confused with which app to opt for or which would be the best app that you should download to record your gameplay.

We have already compiled a list of some of the best screen recorder software for Windows 10. You can check out the list and download the app as per your preference.

To demonstrate how you can use a third-party app to record your gameplay, we will make use of the Bandicam screen recording app.

It is one of the best and most popular names when it comes to screen recording and editing. The interface is nice and clean. You get the option to save the recorded file in MP4, AVI, or even image files.

Let us take a look at how you can use Bandicam to screen record on Windows 11 with audio.

We have just given an example of the Bandicam video recording app, but several other apps may even provide you with more advanced options.

Besides, you need to unlock the Bandicam app to unlock all of its features. In such a case, you can make use of the free video recording app available for download from the Microsoft Store. It is called the Free Screen Recorder.

It is a pretty straightforward screen recording app. Some of the features of this software include no watermark, unlimited screen recording, a simple interface, a browser recorder, and more.

How to take screenshots of your gameplay?

While video recording is a nice way to stream your gameplay online or store it for uploading at a later stage, you may require a thumbnail for the video or you may want to highlight a special moment during your gameplay.

In such cases, screenshots can come in handy. Screenshots simply mean a still image of what’s happening on your Windows 11 home screen.

You can opt for different software to take a screenshot, but for sucha simple task, we would advise you to make use of the PrtSc or Print Screen key on your keyboard.

When you press this key, your PC immediately takes a screenshot of the home screen. But once you press the PrtSc button, you immediately need to paste it into an image editing app or drawing app such as Paint It. Only then you will be able to save it.

Otherwise, if you are using Xbox Game Bar, then there is a screenshot icon on the top-left menu bar. You can either press it or use the shortcut Windows + Alt + PrtScr to capture the screenshot. Here, you will be able to locate your captured screenshots inside the Videos>Captures folder. 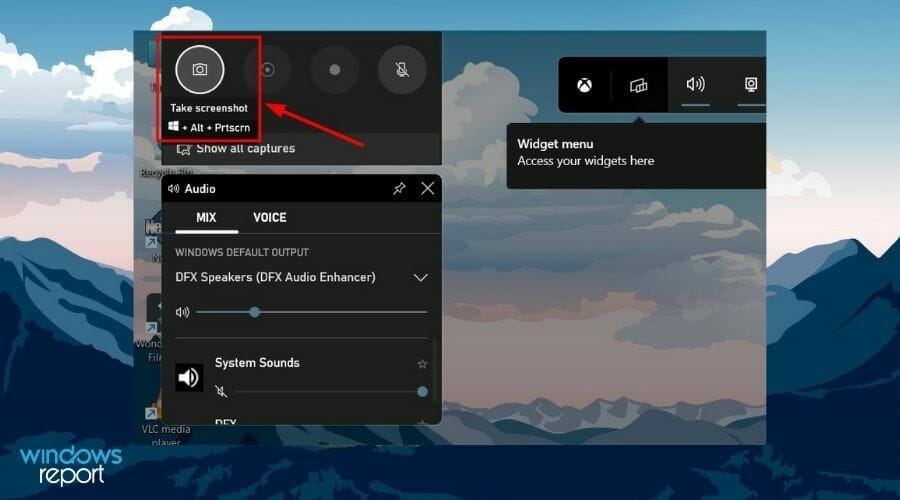 You can check out our guide where we have compiled a list of all the different ways which you can use to take screenshots on your Windows 11 PC.

Let us know in the comments section below which option mentioned in this post is used by you to record your gameplay videos on Windows 11.

windowsclub/ author of the article
Zainab is a self-motivated information technology professional, with a thorough knowledge of all facets pertaining to network infrastructure design, implementation, and administration.
פוסטים אחרונים
קטגוריות